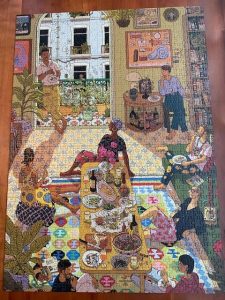 The Puzzle Did It

Many of you know that this past November, during National Novel Writing Month (NaNoWriMo), I completed the first draft of the 2nd book in my historical novel series, Driven. I had a blast placing Emily on a ranch in Wyoming and complicating her life.

But now I had a problem. There’s a rule about what to do after finishing the first draft: Leave it alone for two weeks (or longer) before touching it. Argh! All I wanted to do was start on page one and find the perfect words. Rearrange my sentences – research how to hitch up a two-horse wagon. But I’d promised myself I wouldn’t.

Enter the miracle of a puzzle. It was fate while shopping online (NY Public Library if you’d like to know) that led me to it. How could I turn down a title like “The Raconteur”? (If you’ve forgotten, a raconteur is a person who tells anecdotes skillfully and amusingly. In other words, a storyteller.) The artwork by Ilya Milstein was so intriguing. Plus, the description said it would only take 3-10 hours to complete!

When it arrived, I immediately busied myself finding the outer edges in a sea of 950 non-edges. Would this help me forget the manuscript that was waiting on my desk?

Eight hours later, I almost had the outer edge complete, but damn that bookshelf! Where was that final edge piece? Had they forgotten to include it in the box? I hobbled away from the table, leaving my efforts for another day, my back aching from the hunch of concentration.

Day two, I got up early – really early, to find that missing bookshelf piece. No way was I going to let that puzzle get the best of me. Nine hours later, so absorbed I hadn’t even eaten, the self-doubt swirled in my head. Was I slower than the average puzzler? How come none of these crummy tile pieces have a smidge of black on them? Wait – isn’t that the bookshelf’s missing piece?

All at once, it hit me. Puzzles anchor you to the present. They offer you the gift of noticing your thoughts moment by moment: frustration, joy, confusion, relief, anger. Often I was alternately in and out of “the zone” – scanning the remaining pieces like a hawk, somehow locating the exact one I needed. Then five minutes later, I was utterly lost.

On day five, still in my pajamas, I was all alone in the kitchen with the last puzzle piece in my hand. I didn’t want to let go of it. I looked up as if someone should cheer this moment. A pool of sunshine illuminated the puzzle as I slipped that final piece of tile into its rightful spot and began to laugh. It had been five whole days since I’d thought of my manuscript and the things I needed to tackle. I ran my hand over the completed puzzle and turned toward my desk.

Vanya is the award-winning author of Boot Language. She’s spent decades teaching writing as well as mentoring educators in the oldest, continuously used schoolhouse in California. Her essays have appeared in a dozen literary journals and anthologies. Find out more about Vanya at www.vanyaerickson.com.

What’s New in May